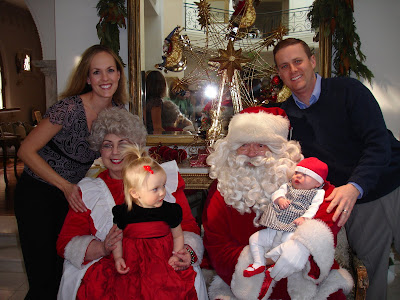 Monday: (2 appts) a visit to the pulmonologist because of Whitney's continued "labored breathing". He confirmed that Whitney does have tracheomalacia and, in addition, laryngomalacia. We also had occupational therapy on Monday and Miss Wendy was VERY excited to see the progress Whitney has made since before the holidays with eating and how she has continued to get stronger as she recovers from surgery. (I will go into more detail about Whitney's eating later in this post.)

Tuesday: (3 appts) We had a physical therapy appointment (Miss Heather) and this was yet another good appointment. Whitney is getting stronger and is even beginning to pull her legs up when lying on her back. Heather said this is a 5 or 6 month skill, so we are very excited (Whitney turned 4 months old on Christmas Day). We raced to finish lunch as quickly as we could after PT to make it to not one, but two pediatrician appointments - yes, Anne actually had a Dr. appt. this week. I guess she decided it was about time she go to one of these doctor appointments we are always going to with Whitney:) This was a very positive appointment as well. Both girls looked good. Whitney's heart sounded GREAT and she managed to gain 1 lb. in just 3 weeks!!!!! Prior to her surgery she had only gained 2 lbs and a few ounces from birth until surgery, so this is a pretty big deal. Whitney now weighs 11 lbs 4 oz and is 23 1/2 inches!

Wednesday: (1 appt) We went to Riley Hospital to meet with Dr. Brown, Whitney's heart surgeon. Whitney had a chest X-ray when we first arrived and then later we met with Dr. Brown and he again confirmed that her heart sounds SO MUCH BETTER. He did mention that the chest X-ray shows that Whitney still has fluid in her lungs, but that it is improving and should continue to improve with the medicines she is taking. Nothing else to report (no news is good news!)

Thursday: (1 appt) We had speech therapy today (to work with Whitney on taking a bottle) and this appointment went VERY well. Whitney has improved a TON in the past week all the way around. She is feeling better, stronger, has better color, is more alert and best of all - she has started to take a bottle!!!!!!

The turn around really began to seem more significant on December 30th. She started latching on a bottle and taking a few sips and swallowing without gagging. Then as each day has gone by she started taking a little more, then a little more and each time could do a little bit better with the bottle before becoming too exhausted to continue. Today is the best day of all!!!! She took 2 1/2 ounces (70 ml) with the speech therapist and then when I fed her tonight she took her entire feeding, 130 ml (a little more than 4 oz)!!!!!!!!!!!!!! This is truly a MAJOR accomplishment. Prior to the surgery, Whitney would not even latch onto a bottle and soon after the surgery the most we could get her to take was 3-5 ml (a splash of milk, at the most). I immediately called my parents, brother, sister-in-law & sisters then Mike called his parents, brother & sister-in-law to share the news! (Can you tell we are excited?)

As a side note, we had a very fun (as much fun as you can have with 2 year olds and babies for New Year's celebrations) New Year's Eve. We drove to the booming metropolis of Floyds Knobs, IN to ring in the new year with our friends the Cassises. (Floyds Knobs is on the Indiana side of the Ohio River, just across from Louisville.) Andrew & Angie (the parents) have a little girl, Claire, who is just 4 months older than Anne & a little boy, Drew, who is just 4 months older than Whitney. Anne had the best time ever with Claire and keeps asking when Claire is going to come to her house and she wants me to call them so she can talk on the phone with Claire (this desire to talk on the phone is starting already?) Thank you Angie and Andrew for a fun start to 2009. Whitney even had the chance to go out of state on this trip - we crossed the river and took a family picture in Kentucky in front of the Louisville Slugger museum.

Happy New Year! Here is an Irish toast and an Irish blessing for 2009:

In the New Year, may your right hand always be stretched out in friendship and never in want.

May joy and peace surround you,
Contentment latch your door,
And happiness be with you now,
And bless you evermore. 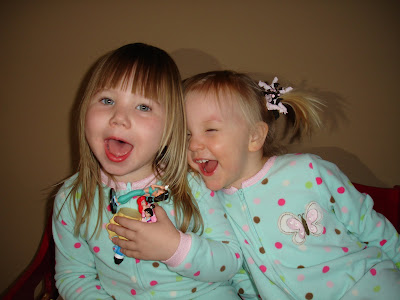 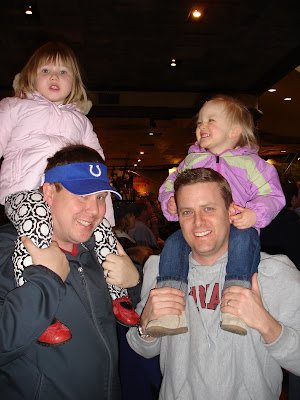 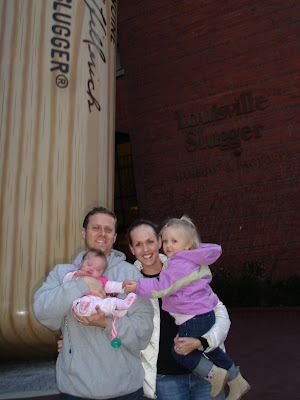 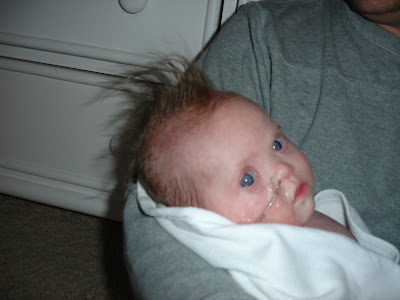 Wonderful news that Whitney is taking a bottle and improving so fast.
Wow..we are so happy !
I am still in Chicago with Mary Carol ..all is calm here for right now.

We're so proud of you, Whitney!

So many good things. Way to go Whitney!

It is so wonderful to hear Whitney is improving every day!

Thanks for continuing to post updates. We think of you often!

Fantastic! It's great to hear/see that, even though you are still very busy with appointments, Whitney is continuing to make good progress and you are all together again.

Oh my, too funny! Payton had crazy hair like that too!

Hello I am Traci! My daughter Ashlyn had that same mohawk as a baby! Whitney is a living doll :)