Mike has been asking me to put this on the blog for a couple of weeks now (I am a total slacker with posting lately!) Anne has improved her knowledge of the words to the I.U. fight song... here she is singing it in its entirety (filmed 3-31-09) --- I am sure our friends in Lafayette/West Lafayette will just love this! :)


In Whitney news - she has now officially rolled over all by herself. She first rolled from back to stomach last Monday, 4-13-09 and then a few days later rolled from her stomach to her back. I have not been able to catch it on video because she isn't really into rolling, even though she is capable of doing it. She is really very happy to just sit and watch (toys, Anne, our dog Maddie, etc...) rather than go after something. Just for fun, here is a picture of Whitney :) 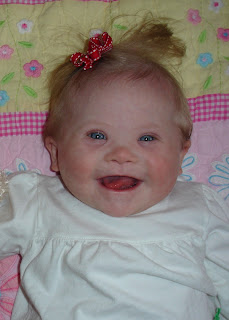 My name is Sarah said...

Your girls are so cute! I'm not familiar with the fight song but it sounds like she did a great job!

Oh yes,
Anne is a singing star..and
wow she has the song memorized..
Congratulations..so sweet!
And Whitney..wow her winning smile..
congratulations to Whitney
and her rock & rolling..so cute!
God bless all.
Love always,
Aunt Kathy

I'm so impressed that she could sing that song by herself! Wow! and yay Whitney on rolling over! your girls are both just precious!

She is too cute!