Mike and I had the chance to get away for the weekend last weekend for a wedding in Las Vegas. It was the first time we had been away more than just a night out (which hasn't happened all too often, either) since before Whitney was born! One of Mike's best friends from growing up lives in Los Angeles and he and his new wife had their wedding at The Four Seasons at Mandalay Bay in Las Vegas. It was a BEAUTIFUL BEAUTIFUL wedding! They closed the pool at the Four Seasons at 4p.m. to set up for the wedding - it was an evening/night wedding outside by the pool. The ceremony was beautiful (can't think of another word to use), cocktails and appetizers were WONDERFUL and the dinner and dancing were so much fun! We are so happy we were able to go to the wedding and the added bonus was we had a weekend in Vegas at a BEAUTIFUL hotel with friends, great weather, dancing, laying by the pool, seeing some of the different casinos on "the strip", some cocktails and NO feeding anyone except ourselves, NO changing diapers, NO getting anyone ready for bed, NO messes to clean up, etc... Thank you Bonnie and Papi (Mike's parents, Lynne & Dan) for watching the girls for us (+ our dog Maddie, too!) We didn't worry a bit about them while we were gone and although we missed them, we had a GREAT time and it was a much needed break!!! Although, I did not feel like we had too much of a break after we proceeded to stay out until 6 a.m. Indy time (3 a.m. Vegas time) on Saturday night --- there is truly no way to have a concept of time in Las Vegas!!!! We knew it was time to go up to the hotel room when the dealer at the table where Mike was playing black jack told him 2 X, "Excuse me sir, I think you are falling asleep!" (probably not the best gambling strategy) :) Our flight didn't get in until about midnight Sunday night, so it was a week of trying to catch up on sleep and readjust to "regular life" :)

in front of the Paris 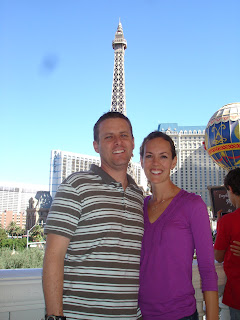 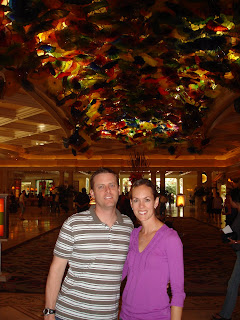 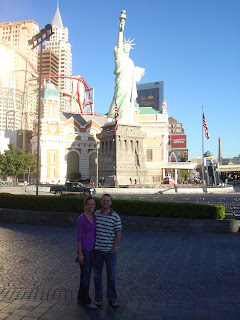 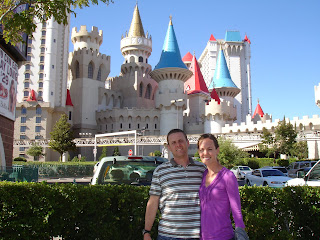 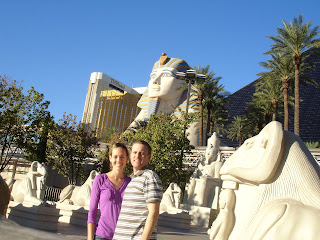 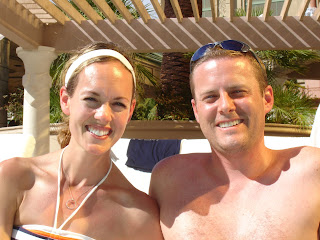 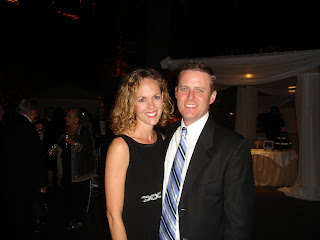 view at the reception of the pool and head tables 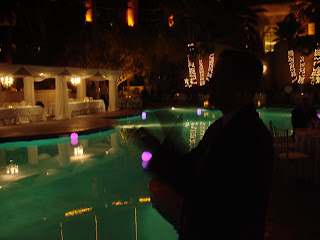 SOOOOO awesome! You two are so darling! So glad you got a getaway together. And I'm sure it was a sweet reunion when you got home to your girls :)!

You look so happy!
Great Pictures!
So happy you had a getaway!
God bless . Love, Aunt Kathy

how wonderful that you were able to get away as a couple for the weekend- no kiddos involved LOL Too funny about falling asleep at the blackjack table though!

9 yrs ago we were in Vegas for a high school reunion and saw the water show outside the Bellagio. I told Joe if we ever go back to Vegas I wanted to stay at that hotel just because I like how the name sounds LOL

I just wanted to say how wonderful it was to see pictures of all the landmarks with you guys standing in front of them. I really dislike photos without people in them and you did a great job of including yourselves in them all. What a beautiful setting...glad you got to have a little away time!!