We have started a "therapeutic listening" program with Whitney to work on helping her filter out background noise and pay attention when someone is speaking to her or trying to get her attention. Whitney failed her newborn hearing screen and multiple hearing tests following her birth. Unfortunately, her heart was more of a severe issue in her first few months of life than her hearing and we were unable to pursue her hearing as quickly as we would have liked because we were more focused on just keeping her alive and getting her to her open-heart surgery date (December 1, 2008 - 3 months and a few days after she was born) and then keeping her healthy and helping her as she recovered after surgery. We then ran into a problem with an ENT that after waiting nearly two months to get in for an appointment (after Whitney was starting to recover from open-heart surgery) did NOT do her job thoroughly. She merely looked in her ear canals and proceeded to tell me that her ears are clear and look just fine. She did not do a tympanogram, she did not read any of the failed hearing test results and when I got out information I had printed from the NDSS (National Down syndrome society) and expressed concern about how most of the hearing loss in people with Down syndrome is due to undiagnosed fluid in the ears and that they basically recommend tubes almost as a preventative and how with Whitney failing multiple hearing tests that I would like to look into the option to place tubes. This doctor proceeded to tell me (and I quote) - "Well anyone can put anything on the internet." She said this with a very condescending dismissive tone. I wanted to say "It is not like I got this off of some lady's blog - this is the National Down syndrome Society and they are very credible when it comes to information regarding individuals with Down syndrome." - but I did not. Instead I let her speak to me like this and I left the appointment very upset. I then called and requested all medical information regarding both Anne and Whitney (Anne had 2 sets of tubes placed by this doctor when she was a baby and when she was almost 2 years old). I then emailed the Indiana Down syndrome parent distribution list and asked for recommendations for ENTs in the Indianapolis area. We had to wait over two months to get into this doctor and she immediately scheduled Whitney for tubes in both ears. We are VERY happy with our new ENT and Whitney has had two sets of tubes placed since just before her first birthday. The first set of tubes fell out very soon after they were placed and we did not realize it for a few months. It took a little while longer before we could get in for surgery but when we did, we had "t-tubes" placed (March of this year) and Whitney's hearing is SO MUCH BETTER! It was like a cloud lifted.

Throughout this ongoing battle with fluid in Whitney's ears and not being able to hear due to this thick glue-like fluid, Whitney missed the first 12 critical months of language acquisition as well as possibly the natural time to learn to respond to your name and to respond to sounds in the world around you. It is noticeable that when you call Whitney's name she does not always respond or does not know how to tune out other things and focus attention when someone is trying to get her attention. Part of this could be "selective hearing" :) But, another part, I think, is that she just never naturally learned to respond by turning and focusing attention when her name is called (because she could not hear very well due to thick glue-like fluid in both ears)

We are very lucky to have WONDERFUL therapists and also a very caring and WONDERFUL preschool teacher for Whitney. Whitney's teacher is the one who asked me if I had heard about any therapeutic listening programs or if it was something I might want to look into or consider to help with Whitney's ability to turn to her name consistently or to tune in to the world around her (and also tune out background noises). I asked our therapists about this and it turns out our Occupational Therapist is trained in a therapeutic listening program called "Vital Links". This type of program is often used with children who have sensory "challenges" but we are trying to use it to achieve better response to voices and sounds and to be able to filter out background noise. On the Vital Links website they have the question, "What is Therapeutic Listening" and this is their definition:

Therapeutic Listening® is an evidence-backed protocol that combines a sound-based intervention with sensory integrative activities to create a comprehensive program that is effective for diverse populations with sensory challenges. Therapeutic Listening can impact sensory modulation, attention, behavior, postural organization, and speech and language difficulties. Trained therapists learn to use modulated CDs to set up programs for clients in homes, schools and clinics. Listening is a function of the entire brain; when we listen, we listen with the whole body.

I do feel like this program is making a difference for Whitney. Our biggest challenge is keeping the headphones on her head because they are still very big on her tiny head, even in the smallest setting on the headphones. She is getting better about not immediately taking them off as soon as we get them on her head - but as soon as she remembers they are there, she tries to take them off. She seems to like the "listening part" but not so much the having something on her head part :)

Here are some pictures of Whitney during her "therapeutic listening". Hope this is helpful in case anyone else is experiencing this with their children or if their children have any sort of "sound defensiveness". 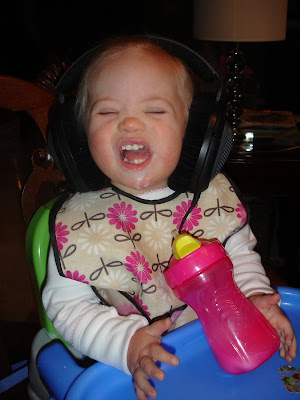 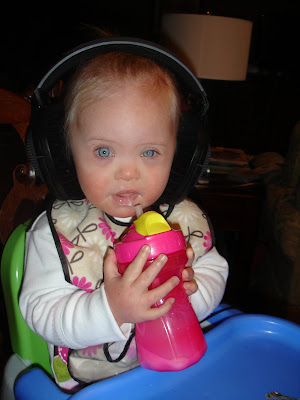 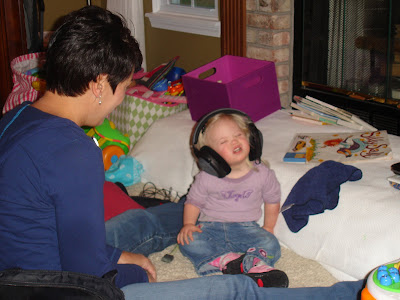 So glad you found a great ENT and that she is hearing so much better now!
She looks so cute with the headphones on.

Very interesting! I am going to have to visit the site to learn more about this. Landon has passed all of his hearing exams to date and does not have fluid in his ears. Hmmmm, I can't help but still wonder why is isn't making more sounds or attempts at repeating words?!

Thanks for the info Laura and good luck!! I hope you see some changes soon=)

BTW, she looks so cute with those headphones on!!

Love the look on her face! Very cute. I am off to the ENT for the first time tomorrow, and this was a timely reminder to talk about Luke's hearing issues as well as adenoids etc. Thanks :)

I love her face when she's listening. Like she is really getting into it!
I'm so glad you went to a new ENT. Doctors like that are not worth our time!

I'm so sorry you had such a bad time with the first dr, but hooray for finding a new one...so many parents don't follow their gut because "drs know best". And true, I didn't go to med school, but to be so dismissive is so rude!
But Whitney looks like she's having a good time with those headphones...so hopefully she'll get to where she needs to be soon!

Glad I found your blog! My daughter's OT is trained in this and I was going to ask her about it. I thought the headphones would be kid sized. Were they covered by insurance?

Oh my gosh that last picture just makes her look so tiny with the headphones on. So funny. There is usually at least one kid every week when we take Lindsey to PT that is using the same program with their therapist. It is a big open area so all the therapist and kids interact as part of the therapy. They have a lot of great things to say about it. Good Luck!

Wow..I am so proud of Whitney and of you all for your research and findings to help..very impressive..
Whitney's pictures are Precious!
Thanks for sharing. God bless you.
Love, Aunt Kathy

That was one of the most interesting things I've read! I'm glad she is getting the therapy now. She looks so cute with those headphones on!

Avery started doing this at her therapy too but then we had to switch to in home therapy when I had the twins so the new therapists werent trained in it..but I did notice a difference in Avery too when we were using it too!!

Those pictures with the headphones are too cute!! Claire has passed her hearing exams, but there are times it is HARD to get her attention. I wonder if she really can't hear, or if it's just her stubborn streak showing through...

I am glad you are posting info. like this. I am a little behind you on this journey and can see some things to be looking for. I guess you already know that your girls are absolutely beautiful and precious. Love their eyes!!

This post is very interesting. Lucas has the same problem, it's hard to get his full attention. He passed his newborn hearing but has scored low on the last one we had. He had tubes placed, I haven't seen much of a difference. It's so difficult to figure out if it's a hearing issue, attention issue or if it's something common in kids with Ds. I look forward to reading about her progress in this program!

So glad you found a good ENT now!

How do you know if your child is having a problem with just selective listening or if they are having a hard time tuning other things out? I'm going to have to check with our OT about this...I think Miss B might be a canidate...I wonder if STs do this type of therapy too?

Miss B just had tubes in for the first time a few weeks ago--it seems to be making a difference, but I'm constantly worried they are going to fall out and I won't know--how do you tell??

Thank you for your love and bright light during my brief melt down.Today is a better day.In fact,i felt better just getting it out.Just like you said.


I was by the other day.Read this entire post and got interrupted before I could comment.i have heard amazing things about this program.Have contemplated it for Zoey.Lots of positive stuff out there on it and the benefits to children with varying issues.Think I might re-visit the idea ... maybe we could program ... "Eat Zoey,Eat"Kidding.

The headphone pictures are killing me!!

Have contemplated it for Zoey.Lots of positive stuff out there on it and the benefits to children with varying issues.Think I might re-visit the idea