today was the first day of preschool for anne and whitney. this is anne's last year of preschool - it truly seems like each day is going by more quickly than the one before and i know she will be having her first day of kindergarten in just the blink of an eye. whitney is in her second year of preschool. she made the cut-off for the 2 year old class last year by 6 days. she was by far the youngest and on top of it did not even walk until february... this year is a different story. we are so excited to have her in class with the same teacher again this year! she went just one day a week last year from 9-11:30 a.m. and this year will be going 2 days a week. both girls had a great first day! the director even found me in the hallway and said what a difference the summer had made for whitney. she knew just what to do, was listening and following directions. we are also working on potty training, so keep your fingers crossed that she will continue to do well and that i will have the courage to make the gigantic leap to underwear soon. i learned about the foxx-azrin toilet training method at the July parent meeting sponsored by Down syndrome Indiana. we had already been working with whitney on going on the toilet and trying to get her to recognize when she needed to go to the bathroom. we have been saying "go toilet" and she now says "go toilet" and signs "toilet" at the same time. this has been a "slowly but surely" type of training so far... but after learning about the Foxx-Azrin method I think to put us over the edge and make the leap to underwear we are going to need to dedicate 2-3 days of staying home and wearing underwear and trying to get whitney to drink drink drink! hopefully soon.... yeah and agh! at the same time!

here are a few pics of the girls from just before school this morning: 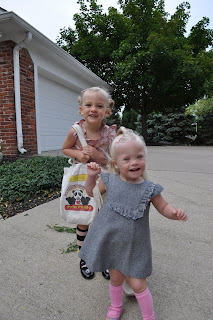 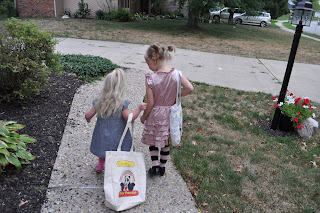 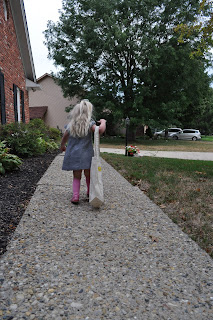 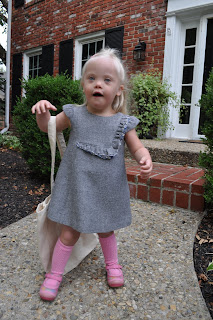 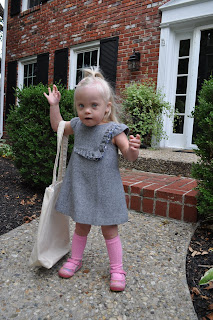 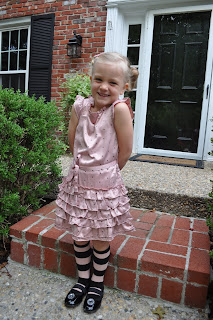 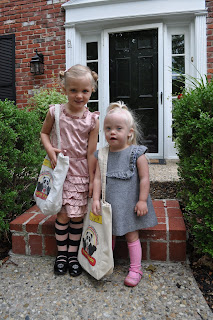 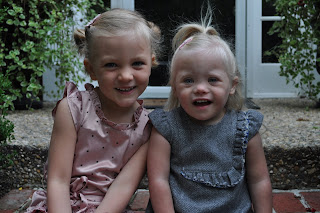 How fun! Hope it was a great day! LOVE the girl's socks! They are too cute!

Good Luck with the potty training..i couldnt get the link to work to see if it was similiar to what we did..but it sounds like it..but u might want to give yourself more then a couple of days:) it took us about a week to get it...and even now we still have accidents but not as much any more!!!

YAY for great first days for both of them. Good luck on the potty training.

Awesome! They both look so cute!

Absolutely love the photos.. They are instant classics! Good luck to the girls- and the parents too!

Hi
My name is Jenna and I came across your site. Your daughters are beautiful, precious and special gifts. I hope they are having fun in preschool. I was born with a rare life threatening disease, and developmental delays. I love it when people sign my guestbook. www.miraclechamp.webs.com

Congratulations to Anne and Whitney! They look great and know are doing great . Yes, we notice a big change in Whitney, she is more grown up and darling as is Anne.
WE loved our visit with them.
God bless you. Love, Aunt Kathy

They both look SO adorable!!! I'm impressed with the potty training, WOW! We are still working on it : )

I know I say this every time...but your girls are absolutely gorgeous!!!

OMG they are adorable. I know this is old, but I love their outfits! LOL