Whitney's surgery this morning was a success! The dr. put tubes in both ears, performed a laryngoscopy and bronchoscopy. She decided that Whitney's adenoids and tonsils did not need to come out at this time. She said that part of Whitney's breathing issues as well as her loud noises when she breathes are due to laryngomalacia, tracheomalacia (we knew from seeing a pulmonolgist that she had these two conditions) and additionally, she has bronchomalacia (http://en.wikipedia.org/wiki/Bronchomalacia). The dr. does not seemed concerned at this time about the bronchomalacia and will keep an eye on Whitney when she sees her for office visits. We are hopeful that she will outgrow these "malacia" conditions as she gets older and stronger. The doctor also said that Whitney will most certainly be able to hear better now that she has had this surgery - they removed quite a bit of fluid that had a rubber cement mixed with jell-o consistency (the doctor's description) from her right ear (she said they had to suction 3 times to get it all) and a decent amount of fluid (with a rubber cement consistency) from her left ear.

We are now home and Whitney has had one bottle and is back down for a nap. I could already tell a difference in her hearing! Yeah!!! We are so thankful to finally have her hearing issues addressed and hopefully now she is hearing everything so much better. 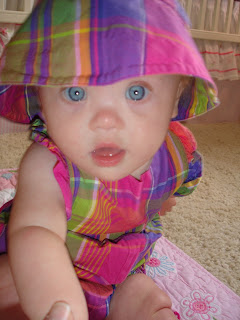 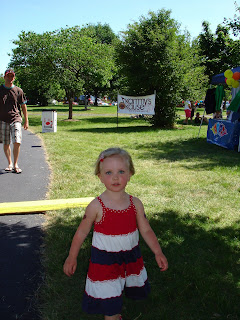 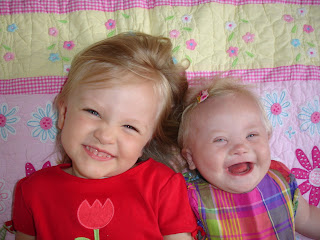 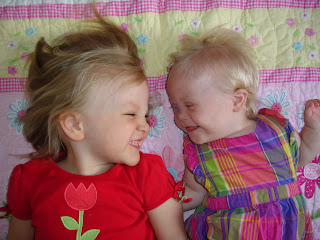 My name is Sarah said...

Oh I love that hat. so cute.

Yay, good news all around! The pics of the girls together are just priceless.

Yay Whitney!!! Glad to hear everything went well :) As always, I love the pictures of the girls! Especially the finger and toe nail pics!

I'm glad it went well! The are both darling!

I'm with Sarah, the hat is too cute! But those eyes, GORGEOUS!!

Happy to hear that everything went well with the surgery.

So glad that everything went well.

Those pictures are priceless!

Congratulations! So happy Whitney
got along so well and the hearing
has improved! Yeah!
The pictures are all so precious..
and the manicure and pedicure
look so good!
God bless you. Love, Aunt Kathy

Glad that all went well--hooray for clean ears!

Hurray! So glad it went well and that monitoring is all that is necessary right now... and, oh, those pictures! Those giggles are the best!

Super news on the surgery and hearing issues!!I know I tell you alot how gorgeous your girls are but they are just so darn beautiful :)I just love how light blue Whitney's eyes are!!

Hooray for the ear tubes - glad it was a success! The pics of the girls are adorable, esp. the one of them giggling together - too cute!

That's great news about Whitney's ears! And I really don't think your girls could get any cuter!!!

Awesome news and she still takes my breath away!!!

Glad to hear the surgery went well!
Whitney is such a trooper! The pictures of the girls are adorable! Especially with the girls looking at each other and laughing! You are lucky parents of two great girls!
Love and hugs, Jacqui

so glad the surgery went well!

LOVE the last pic of them looking at each other!

Love those beauty parlor photos - priceless! Glad to hear that your mom is feeling a little stronger. Wonderful to hear that Whitney's hearing is restored and nothing else had to be removed!

I love you family, I hope you don't mind me looking, I have a son with down syndrome! I found you through a long line of people! beautiful kids!