I have been meaning to write a post on this for a few months now. I was just "reminded" of this after reading Adrienne's post at Our Unexpected Journey. Bennett (Adrienne's son) is 9 months old today and is learning to use a sippy cup. Although he is practicing with a sippy cup, Adrienne has ordered him a Honey Bear Cup so that he can transition from a bottle to a straw cup, and it has not come in yet. Here is short article from Parenting magazine that gives a brief summary of the benefit of a straw cup vs a sippy cup.

Anyway - Adrienne mentioned how she wished there were handles on the Honey Bear Cup (and I don't think I have found any straw cups that have handles) & I thought the same thing. I found something called Lilybugs on the website http://www.mom4life.com (I have found LOTS of great things on this website:) I thought it looked like something that might work... I ordered one (they have free shipping!) and Whitney LOVES her Lilybug! It really does help with learning to hold your own straw cup (although, Whitney has figured out that she much prefers to have us "hold" her cup for her, even though we KNOW she is capable of holding her own cup. She is working us!!!) Lilybugs have even won the 2006 iParenting Media Award in the categories of "Feeding" and "Hot New Product". The best price I have found is on the mom4life website (especially with the free shipping... it is a better deal than ordering direct from the lilybugs website). They have both "boy" and "girl" designs... Here is a picture of Whitney's "Lilybug" : 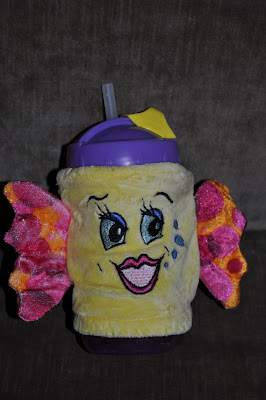 Oh thats so cute! I haven't been keeping up with the new cool stuff for our kido's since Jax doesn't eat by mouth!

i have never seen those before. they are such a good idea!!! i'll have to keep those in mind for the next little one,

Thanks for sharing this Laura. This just might be what Landon needs. I'll have to check it out!

Thanks Laura...The cup is just
gorgeous and so cute!
Thanks for the video..yes ,each
person is God's child and each
person deserves respect!
Thanks for being at Donna's funeral..we all so appreciated
you all and all your love.
God bless you. Kathy

I am SO excited to see this. I'm actually a little teary. I have a friend whose son has Down syndrome and dwarfism - his arms aren't long enough to hold his bottle/sippy and the typical handles won't work either. He's getting so frustrated because he really want to hold his bottle/sippy himself and I think the lilybugs will be PERFECT for him. I'm going to go order a couple right now. I never cease to be amazed at what I have learned from my fellow blogging moms. Thank you! Thank you!!

I love this cup! I saved your page so I dont forget about it when Claire gets older.