This past Tuesday was the D.A.D.S. (Dads Appreciating Down syndrome) Holiday party. I guess every year they have their holiday party at Recreation Unlimited's showroom (which is a company that makes awesome playground equipment). We had a great time and even had a visit from Santa and Mrs. Claus! Whitney was not scared of Santa or Mrs. Claus and was happy to sit with them! Anne was very funny about Santa - she was definitely not scared, but was in awe - Santa was really here at this party???!!! She just looked at him and couldn't believe he and Mrs. Claus were really there at the party with us --- when we left, she looked around the parking lot and asked us what car they drove to the party. Mike explained that they came in their sleigh, but we also told her they might have decided to drive their car to the party, we weren't sure. Here are some pictures Mike took with his cell phone (I could not believe I forgot to bring my camera!!!) 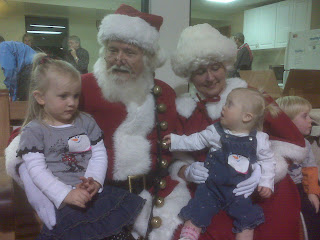 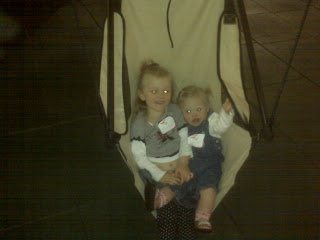 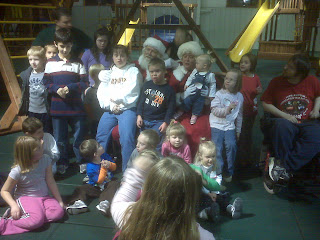 That looks like a fun party. Way to go Whitney for sitting on santa's lap twice:)My little girl Blyss still won't sit on santa's lap. Thanks for the tip on the Christmas music. I found them on u tube and I am going to have a listen. I do use a little olive on Wysdom's skin and prunes. I will try your suggestions though.Have a great week too.

How wonderful!
Sounds like Anne is thinking
hard about Santa and his traveling
which means to be careful because
she is very smart..
Such a precious story and pictures!
Thanks. Enjoy!.
God bless all. Love, Aunt Kathy

What a great party. She looks like she's really studying Santa!