(Mike here) - It is hard to believe that it has been one year since Whitney had her open heart surgery. December 1, 2008, was a very tense, nerve wracking day. Around 4:00 p.m. that fateful day we were finally able to see our little Whitney post-surgery. She was lying there with tubes, monitors, machines hooked up to her, etc., and it was scary. In the end, Whitney came through just fine. She has made leaps and bounds since her surgery. She has really flourished lately. It took her about 6-8 weeks to fully recover from the surgery and since that time she really has taken off. In retrospect, we are so thankful to the doctors, Dr. John Brown in particular (her heart surgeon), the nurses and the entire staff at Riley hospital.

Without their knowledge, expertise, care and round the clock attention we don't know where or how we or Whitney would be. THANK YOU! Here are some picture to demonstrate the strides that Whitney has made since her one-year post open heart surgery. Doesn't she look great?!
What a difference a year makes! 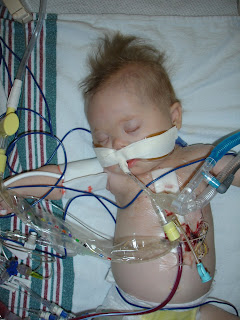 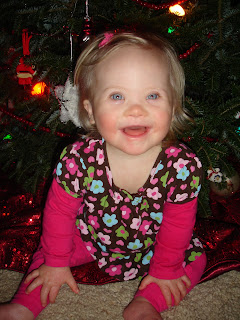 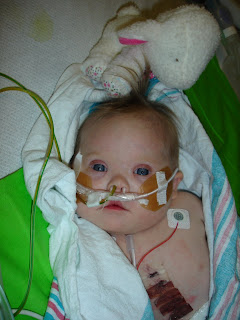 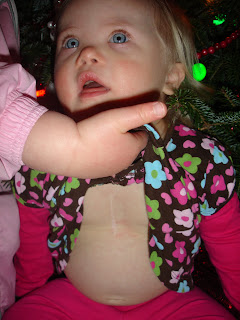 Happy 1 year! She is so adorable!

She is just beautiful! What a wonderful thing to celebrate!

Just found your blog through sweet Sarah. Your girls are gorgeous. Those eyes are to die for!!

Happy one year anniversary. Those pictures bring back lots of emotions. She looks amazing. Love her eyes. So happy that she is doing well. Yah way to go!!

I can't believe it's been a year already. Whitney is looking great! Though, we do miss the kickin' mohawk! Way to go Whitney! And Mom, Dad and Anne for taking such good care of her.

Happy Heart Day!! Isn't is amazing that it's been a full year?! Ah, our babes are so tough : )

she's huge! I can't believe it. the changes are amazing. We're so proud of you, Whitney!

YEah 1 year! I think you guys had some of our doctors & nurses - Dr. Bysani laft Peoria PICU to be the director @ Riley while Christopher was in. There is also a wonderful Cardiac PICU nurse that works both in Peoria and Riley named Jessi (Jessica).

Keep up the good work Whit! :)

happy heart day! a year sure does make a big difference!