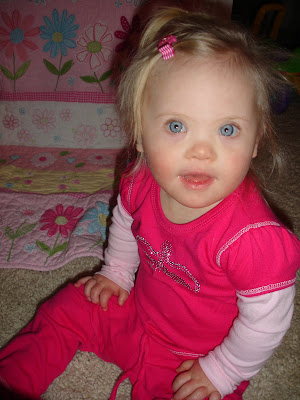 This is the face of a paper-eating troublemaker! We arrived at the hospital bright and early for Whitney's surgery to put in her second set of tubes. Her first set was placed in July of this past summer and at the beginning of December we realized she had fluid in both ears. We tried ear drops and also a hydrogen peroxide/water mix that the ENT's office suggested to clear her ears... neither worked and at the beginning of February, at her 6-month checkup from her tubes surgery the otolaryngologist said that both tubes were no longer in place. We have been looking forward to March 9th for a month, just waiting for new tubes so that Whitney could have the fluid out of her ears and hopefully be able to hear properly. Well... Whitney had her own plan for how today would go --- as we were sitting in the room waiting for her to go to surgery, the anesthesiologist came in to talk with me. She and I were talking and Whitney was sitting next to me on the hospital bed playing with the package that her hospital socks came in. This package was plastic with a paper label that you peel apart and take the socks out. I was paying attention to the anesthesiologist and realized that Whitney had put the package in her mouth. I turned to Whitney to get the package out of her mouth and noticed that the paper label was wet and a piece was missing. I looked in her mouth and there were two pieces of paper - I swiped her mouth to get the paper out and was able to get the bigger of the two pieces. I went back in to get the smaller one that I had seen toward the back of her mouth and she had SWALLOWED it! The anesthesiologist then said, "I hate to tell you this, but we are not going to be able to do surgery now." WHAT???!!!! She explained that while she is out for the surgery that her gag reflexes would not be working and that there was a danger that Whitney could aspirate the piece of paper into her lungs and that would be very dangerous. I certainly did not want to take any risks, but I also did not want to go home without the tubes placed in Whitney's ears. I asked if we could try gagging her, since she had just swallowed it, to get the piece of paper. She looked at me in shock that I would even consider gagging my own daughter on purpose (not something I would ever normally want to even think of doing... but I would rather do that and still get the tubes, I guess I am just a heartless mom??? :) Anyway - she said she would speak with the surgeon and see what we should do. Luckily, they are not making us reschedule - but we have to wait at least 6 hours since Whitney ate the paper but we are to arrive back at the hospital by 1:30 p.m. even though they will not be able to operate until 2:30 or 3p.m. So.... please keep Whitney in your thoughts and prayers --- especially that she can get through this day without food or drink and that she will not be so desperate to eat when we go back that she decides she needs to eat more paper!!!!!! Whitney is seriously a little troublemaker!!!! She has made what was supposed to be her easiest surgery yet, complicated! :) As I was walking out this morning the word had already spread with the nurses and other doctors on the floor - they smiled at us and one nurse said, "make sure you get this in her baby book"... our nurse said she has been on this floor for 20 years and never had anything like this happen or heard of anything like this happening... guess we just don't like to make things simple or easy. Oh, Whitney - I love you, even if you are a paper-eater!
Posted by Anne and Whitney: Up, Down and All Around at 3/09/2010 11:23:00 AM

Her eyes take my breath away! She's so beautiful!

Laura, this story is horrible and hilarious at the same time. I hate that you have to wait, but my god, what a little stinker. It cracks me up. Way to go, Whitney, but don't do that again, okay.

Oh my goodness, I could just squeeze her, she is so darn cute even if she does eat paper! I know this situation must have been frusterating, but I couldn't help but laugh, so thanks for sharing it! Hope the surgery goes smoothly without any more "incidents"!

LOL....I think she was trying to outsmart you all, POSTPONING SURGERY:) I think she was quite clever!! Ha! I'm so glad that she is ok and surgery will still go on as planned (with a minor delay). Way to show her who's boss!! Something tells me your hands are going to be full with that little Miss Whitney! She is such a doll!! Good luck with surgery!

I have to echo what everyone has said - hilarious and horrible. Hope the surgery went well you're home enjoying some non-paper related food items ;)

What a stinker!!! So funny. Although, not really. Sorry, but I did have to laugh..even though I feel for you.

I have to say, her beautiful eyes make up for any wrong doing on her part! Those eyes are breath taking!

Well, that's one way to get out of having surgery! Sorry Laura, but I was laughing to myself the whole time I was reading this. Hopefully by now she's has a new set of tubes in place and no paper in the tummy! Hopefully she wasn't too grumpy from being hungry either.

Oh no, bet you didn't know whether to laugh or cry! Good thing she's so cute :)

This story made me laugh out loud but it probably wasn't as funny to you. This is something I can totally see Madi doing. I love this picture of her...she is beautiful! I hope everything went well.

Oh, my, goodness what a cute little stinker!Ruby loves to try and eat paper too.Glad you were able to go ahead with the surgery later :)

This is too funny! I'm glad to hear it worked out ok though and you were able to get the tubes without having to wait too long.

Thanks for your comment on OHS. We have only seen one cardiologist for her follow up appts, but there are 4 cardios in the practice and they all saw her during her NICU stay. They all agree that the surgery needs to happen before 6 months of age. Up until her RSV Claire was gaining right at the recommended ounce a day, so hopefully she will keep gaining for a while and we can put the surgery off for another couple of months.

she is absolutely gorgeous!