About a month ago I wrote a post about LilyBugs. I also sent an email to Heather, the owner of the Mom4Life website where I first found LilyBugs to tell her how much we love our LilyBug and about the blog post I had written. Heather, the owner of mom4life, emailed me back and was so nice. She asked if she could forward the post link to Crystal, the mom who created LilyBugs, to let her know about how great the LilyBugs have worked for us with helping Whitney hold her own straw up. Crystal (the creator and owner of the LilyBugs company) sent me the nicest email after reading our post and offered to send Whitney a new LilyBug + send an extra LilyBug to "giveaway" through our blog :) YEAH!!! I am so excited to do our very first "GIVEAWAY"!!!

Here are a few details that came in the packaging with our new LilyBug:

"LilyBugs are a wonderful addition to the ordinary, hard plastic bottle or sippy cup. Babies and toddlers instinctively grasp and rub the soft, cuddly handles while feeding. The animated faces, vibrant colors and multiple textures provide visual and sensory stimulation for growing hands and minds." ***just a sidenote: Anne, who is 3 1/2 and considers herself a very "big girl", also loves LilyBugs... now that we have two LilyBugs she is always asking us to put one of the LilyBugs on her cup, too! So... they are for babies, toddlers and "big girls & boys" :)

Features:
-Fits both bottles & sippy cups (*straw cups too!*just wanted to add that, since according to all of the research from the experts when it comes to Speech Language Pathology, straw cups are much better than sippy cups when it comes to forming the muscles and movements of the mouth for speech) - Machine Washable - Great for Glass Bottles - Absorbs Condensation & Leaks - Creats a Smooth Transition from Bottle to Sippy Cup - Provides Visual & Sensory Stimulation - For Both Boys & Girls - Helps to Introduce Bottles or Sippy Cups while Nursing - Separates Drinks Among Multiple Children - Decorative for Fashionable Moms, Dads & Kids - Keeps Little Hands Warm During the Cold Seasons

And because the LilyBugs are so cute - here are a couple of pictures of Whitney with her new LilyBug (Thank you Crystal!!!!!!) 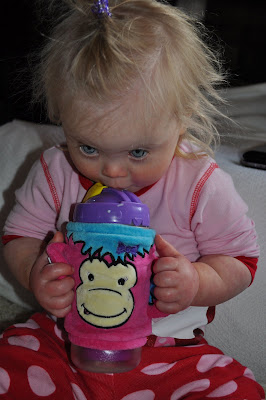 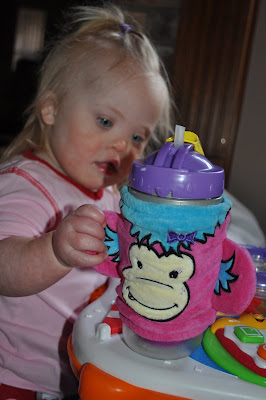 AND.... here is a picture of the LilyBug we are giving away (the "ears" squeak!): 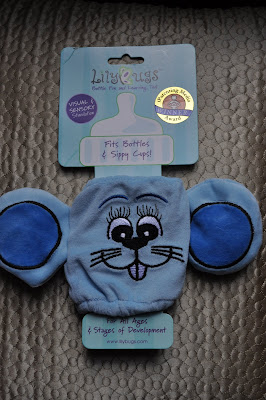 ***If you are interested in winning this LilyBug, please leave a comment on THIS post and we will put all of the people who leave a comment into a bowl or a hat and draw for a winner! The contest will end at the end of the day on Monday, April 5, 2010. On Tuesday, April 6, 2010 Anne or Whitney will draw the winner and we will announce it on our blog :) Also --- I know we have some "international" readers... I will ship the LilyBug anywhere the winner happens to live, so please feel free to leave a comment if you are interested, even if you do not live in the United States! Good Luck!
Posted by Anne and Whitney: Up, Down and All Around at 3/31/2010 10:06:00 PM

Those are cute! How nice of Crystal to send one for Whitney and one to give away!
Obviously, we don't need one, so we don't need to go in the drawing ;)

Love it! Whitney look so cute. Hope you had a great time in CO. No need to enter us in the drawing.

I think these are soooo cute!! I would love to try one of these with Landon, especially now that he is in the toddler room at school! We have been working so hard on getting him to hold a sippy cup or honey bear cup to drink "all by himself", just like his friends at school. No such luck yet. On occasion, he will hold a sippy cup, bang it on his high chair and then whip it across the room! Ha!!

I'd love to have one! They are too cute.

Very cute! I wonder if it would encourage my little one to use his sippy cup!

Absolutely adorable! My two lil ones would love to SHARE ;)

The previous anon was me :)
sugarpez at gmail dot com
Thanks!

These are adorable! I think my little boy would love it. Thank you for the chance of getting one ;)

I too am a fan of Mom4Life and have loved these every since they came out. I would love to win one.

It's a great idea and it's adorable!

I would love to win one! I love that the ears squeak too.

Those are great! How fun!

I REALLY want one of these...I have been meaning to order one for Emily since you posted about them. So if I don't win, I will just have to buy one :-)

We would love one for Lindsey. I am willing to try anything to get her off a bottle and on to cups.

These are too cute! Checked out her website and will probably order one for Judd!