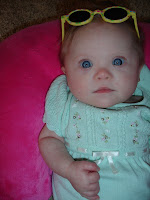 In case you haven't heard about President Obama's interview with Jay Leno on the tonight show, here is a clip from the interview that is causing quite a stir. http://www.youtube.com/watch?v=JKlYT2bseII I am hopeful that this can be turned into a teachable moment and will help with the Special Olympics movement to end the R-word on 3-31-09. I also hope that the President's apology is truly heartfelt and that he, along with our nation, can see the value in each and every person.

"The comment during the taping of the show prompted Obama to pick up the phone on Air Force One and call Special Olympics Chairman Timothy Shriver to preemptively apologize for the remark before it hit television screens. He also reportedly invited Special Olympic athletes to Pennsylvania Avenue to hit the lanes and give him tips or shoot some hoops.

The president "expressed his heartfelt and sincere commitment to work with our athletes and make this country a more accepting place for people with special needs," Lum, the organization's president, said." (Special Olympics takes on use of 'R-word http://www.cnn.com/2009/LIVING/03/20/obama.special.olympics/index.html)

I love this pic ... she has got the most beautiful eyes!