I have some posting to catch up on... I have been sick with some sort of horrible stomach virus/the flu since Sunday night. I finally started to feel a little more normal last night and went through the entire day today feeling MUCH BETTER after 4 straight days of being sick. I know a lot of this has been going around, so I hope and pray my family and friends are able to avoid this like the plague!!!

I will try to do a couple of different postings to catch up - the first one is about Anne's first haircut. We went to Lafayette last week (Wednesday, March 18th) and Cheryl gave Anne her first official haircut! Anne is 2 1/2 and I have trimmed her hair 2 times in her life (trimmed is maybe even an overstatement). Anne literally did not start getting hair until March of 2008. Seriously, I can pinpoint it down to the month - February 2008 - fuzz - March 2008 - hair-. Here is a little video of Anne's haircut - she was VERY SERIOUS through the whole thing. Not upset, not necessarily having the time of her life, just serious. She was very good through the whole thing - I think the only hard part was at the end Cheryl put a cute braid in her hair and Anne was disappointed because she wanted "curly hair" as she told me later. I guess she thought since she was getting her hair cut by the same person that cuts her mom's hair that meant she could have curly hair too. Her hair looked adorable with the new shoulder length cut and braid :) 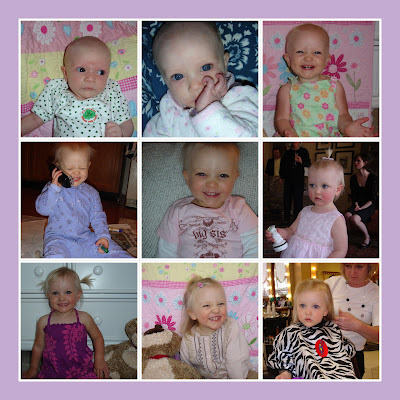 Too cute! She was very serious. Anne's new haircut is looking good!

Anne is so beautiful!
Her hair is beautiful too!
Enjoy!
God bless all. love, Aunt kathy

Anne looks faboo! I can't believe how quickly her hair has grown once it became "established". She looks so grown-up (in a little girl kind of way).

What a great montage of Anne photos - fun to see her hair grow!